Search the right course by selecting the different levels, disciplines or institutions:

The Advisory Board, comprises the Chairman, Mr. Teo Chong Tee (Honorary Group Chairman) and other professionals in the industry. The Committee advises the Management Team on market developments in the educational and related service industries. 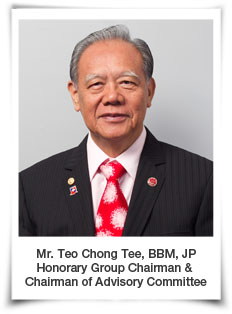 In April 1982, Mr. Teo was appointed the President of the Football Association of Singapore (FAS) initially for a three-year term by the Minister for Social Affairs. As a government appointee, Mr. Teo chaired the FAS Council, managing all local soccer matters as well as building up a good relationship between the FAS and those in the Asian football fraternity. Taking on the Chair, his priority was to spearhead an important and sensitive negotiation with the Football Association of Malaysia (FAM) for the return of Singapore’s participation in the yearly Malaysia Cup soccer competitions. In the early eighties, the FAS was suspended by the FAM from participating in these competitions due to certain unfortunate incidents and unforeseen circumstances that happened between high officials of the two football organisations. The FAM, nevertheless, was receptive of Singapore’s sincere representation in a series of our discussions with them. Singapore was subsequently re-invited into the Malaysia Cup competitions. Mr. Teo was re-appointed to hold the chair for a second three-year term. As President of the FAS, he was also elected as a Singapore’s representative in the Asian Football Confederation (AFC).

Mr. Teo’s first employment following his completion of his secondary school education in 1960 was a temporary Teacher-in-Training. He quit after 18 months on the job. His illustrious career, however, started in Malayan Airways at Paya Lebar Airport on 2nd July 1962, commencing his first employment with an airline by working as a Junior Traffic Clerk. He then gradually worked his way up the rank in Malaysian Airways, Malaysia-Singapore Airlines, Singapore Airlines and SATS. He was appointed the Airport Manager for the airline at Taipei International Airport (Taiwan) from 1970 to 1974. With his vast experience acquired over the years in ground operations, he was elevated to the post of Vice President in the SATS Passenger Services Division. His job entailed a high level of customer service on the ground. This had helped Changi Airport achieve its accolades as the BEST airport in the world for several years. Two years prior to his retirement, he held the post of Vice President in the SATS Cargo Services Division. He gracefully retired from SATS on 1st July 2003 after completing 41 years of his dedicated, loyal and conscientious service in the airline industry.

For his contributions made to the state and the community as a Parliamentarian, Mr. Teo was appointed the Justice of the Peace (JP) by the President of the Republic of Singapore in 1998 for a term of five years. Since then, he has been re-appointed for another three terms. As a JP, he also volunteers his service as a Deputy Registrar of Marriages or Licensed Solemnizer who performs marriage solemnizations for couples outside the Registry of marriages. At the same time, he has been appointed by the Minister for Home Affairs to serve in several other committees managing affairs in the Singapore Prisons Service. Currently, Mr. Teo is a member of the Board of Visiting Justices. He is also the Chairperson of the Home Detention Advisory Committee and Employment Release Advisory Committee as well as the Vice-Chairperson of the Reformative Training Advisory Committee. These are challenging tasks that make Mr. Teo’s retired time well-occupied for a good cause.

On 9th August 2009, Singapore’s 44th National Day, Mr. Teo was conferred with The Public Service Star (BBM) by President S.R. Nathan for his invaluable contributions in the Singapore Prisons Service.

Mr, Teo joined DIMENSIONS International College as its Honorary Group Chairman and Chairman of Advisory Committee in July 2005. He has been in this college since then and has contributed to the growth of the college with three campuses over the years.

Copyright © DIMENSIONS International College Pte Ltd. All rights reserved.
*This webpage is best viewed on Firefox, Chrome or Internet Explorer 9 and above.